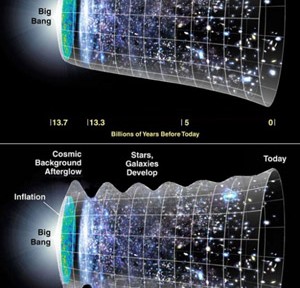 This is huge, pardon the pun, and very much under-reported. We have supplanted the idea that there was a sudden, huge inflation when the universe was born and then a flat, smooth curve with a slight increase in inflation rate recently.

A careful, new study of Type 1a supernova brightness–the universes’s standard candles–give a different picture. Yes, we still have a huge expansion soon after the big bang, but then the evidence is for seven waves of diminishing contraction and expansion thereafter (decreasing in size like the waves around a stone dropped into the water or the ringing of a bell). We are currently on one of the waves of expansion, which will peak and then slow into the next inflationary rate trough. The new model clears up a few anomalies in the old model, like the rate of early galaxy formation. Check it out at  Universe May be Ringing like a Crystal Glass

The diminishing waves of inflation suggest that one big event probably triggered them, with the forces of the universe seeking equilibrium thereafter. Perhaps our universe collided with another baby universe. Maybe it is still recovering from the force required for expulsion from a singularity. My bet is we have the answer soon.